2022 marks 50 years since the migration of Ugandan Asians and 02 November marks 90 days since one journey ended and another began… so we’re putting on a supper club & commemorative event!

On 04 August 1972, president of Uganda Idi Amin served a 90 day expulsion order for all Ugandan Asians to leave the country! 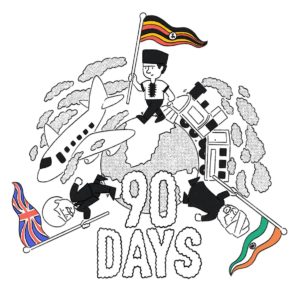 Owner and founder of Situ – Sham comes from such heritage. With grandparents and ancestry from Gujarat, India; parents born in Uganda in 1960’s, arriving to the UK in 1972 and himself born in their city of settlement – Leicester, in the 1990’s. He now continues learning for his heritage and reflects on previous generations journeys by bringing this to forefront in his food and drink, here in Cornwall. As with much of the worlds cuisine being shaped by the travels of recipes, traditional techniques and influenced by the locality of ingredients, Sham & Situ bring these together to create modern Indian cuisine, whilst paying homage to the linage, aptly naming it ‘Heritage Food’.

This event will incapsulate Heritage Food, Art Films and Craft Beer to give a culinary experience of the migration journey, explore human stories and celebrate with our very own Situ X Verdant Brewing collab.

Free entry! It’s hard to find a succinct way to describe a man with nearly 30 years of experience as an innovator and...

You asked, we listened, here it is: music that blends in.  Minimal music & lounge tunes to eat your pizza in pe...